THE BEST
INVESTMENT ON
EARTH IS EARTH

Buy the best place
on earth in “Udaipur”

Gokul Properties is an emerging Real Estate Developer in Udaipur with its footprints dating back to 2008; providing an outstanding level of service and expertise in the residential and commercial real estate market that is both innovative and ambitious. The group has over 12 years of track record of sustained growth, customer satisfaction and innovation.

Etched with professional approach, Gokul Properties ensures that your property buying experience is a smooth transit right from the time of enquiry. All locations are handpicked considering future appreciation, ROI, its proximity development and convenience in and around the project. You can rest assure while buying property from Gokul Properties. Legal procedures, land records and all statutory approvals, clear indication of area statements and the right pricing while buying your dream property qualify a definite tick mark while associating with us. Right from welcoming you to on site associating in your loan and documentation we are committed to guide you through a wholesome experience in buying best properties in Udaipur.

Slide 1
Serenity 76
We are launching a new site plan as a name of "Serenity - 76", It site is on NH 76, At the Airport road, Near Sir Padamawat Shinghaniya University , Bhatewar. 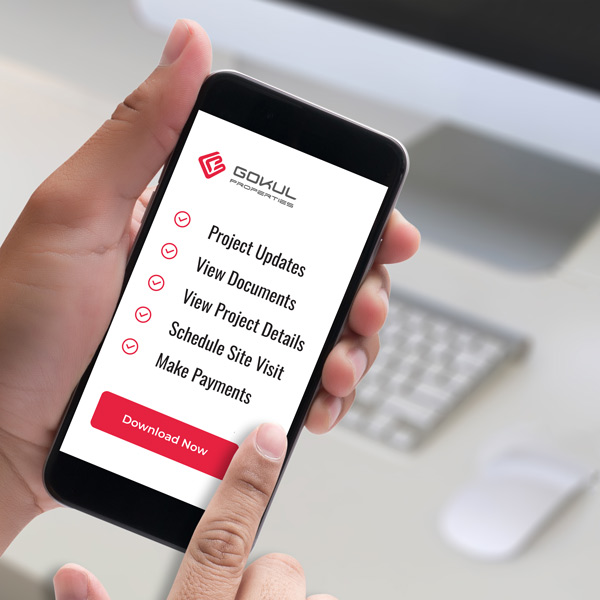 Designed with personalized real estate match making technology, “The Gokul App” helps people find their dream property right from their phones. From property scouting to providing complete assistance in property buying experience, Gokul Properties takes care of all needs of property owner. Here you can check notifications on project updates, check project-related documents via payment schedule and even make payments all through this one app. Download ‘The Gokul App’ and get a tool that makes your property search simple, transparent and buying process as seamless as possible. This application provides all the information that you would ever need to make your property buying decision, including the latest price information, real project and property, photographs and neighbourhood development. With array of smart features, you can now also select date slots for your monthly EMI payments and get notifications on payment due dates.

Evolution of airports and highways
The current Maharana Pratap Airport is declared as International Airport and an expansion for a new terminal is in progress. Dabok-bhatewar road is near the international airport, six-lane state highway, and expansion of the upcoming high-scale industry. National Highway 8 project will have an expansion with a stretch of 113.8 km starting from Udaipur bypass till Gujarat.

Peri-Urban Development of City
Within a span of duration from 1946 to 2011, Udaipur has grown from 17 to 221 sq. km. A huge expansion of peri-urban area was observed in major regions- South and South-East towards Ahmedabad highway, East towards Chittorgarh, North-East towards Nathdwara. There has been a rise in gated communities, high rises, and other projects and schemes. According to the Master Plan 2031, the outskirts of Udaipur will turn into major investment opportunities with huge returns.

Udaipur known as the ‘Beauty Capital’ of Rajasthan is well known for handicrafts- paintings, marble artifacts, silver arts, terracotta items, and other handicrafts. Textile handicrafts and handloom are developed at Shilpgram. To encourage regional art and culture Craft bazaars are organized by Shilpgram.

Our services are designed to maximize your planning opportunities, minimize your tax liabilities and reduce the time spent on managing tax compliance. Our team is here to assist to create an estate plan or review an existing trust agreement. Our team can guide through the complexities of developing and operating real estate. We provide suggestions to our clients and brokers to improve their financial strength and tax outcomes in their businesses.

and manage Your Orders


Udaipur known as the ‘Beauty Capital’ of Rajasthan is well known for handicrafts- paintings, marble artifacts, silver arts, terracotta items, and other handicrafts. Textile handicrafts and handloom are developed at Shilpgram. To encourage regional art and culture Craft bazaars are organized by Shilpgram.

Smart City project of Rajasthan selected Udaipur for its local area development and harnessing smart technologies in the city. Implementation of information & technology and improvement of infrastructure and other services. By the time, property rates will grow in Udaipur and that makes Udaipur be the best place for investment at current.

Heritage destination with uncountable sightseeing options in and around the city. Shrinathji and Eklingji are two important places for Hindu pilgrimage. ‘Royal Wedding’ concept is one business potential of the city; multiple venues in and around the city to celebrate occasions with the richness of royalty. All the major Hotel Chains are there in the city; thus, it a perfect destination for upper-class tourist visits. Healthcare & Tourism sector is at a boost with the opening of different institutes and colleges.

Udaipur is well connected to major cities via Air, Rail, and Road transportation modes. Making it more significant for investment. NH-76 between Udaipur and Chittorgarh is selected as part of the Golden Quadrilateral, which levels up the connectivity with major metro cities viz. Delhi, Kolkata, Mumbai, and Chennai.

High Return On Investment Property rates in Udaipur are lower than the national level as it is still in the development phase. Rajasthan has favorable tax rules resulting in a lower tax burden for non-investors. GST rates on under-construction properties are 5%. Udaipur has seen huge price appreciation (45 to 120%). Rates for the outskirts are lower than the tier-3 cities of the state. With the completion of the development phase, rates of the land will gradually rise.

Gokul Properties and team is here to help you with legal documents required for property acquisition. If you are new in real estate and don’t know the whole procedure of buying a home, we provide the expertise and professional experience to help you avoid the complicated and often expensive legal system on your own. We are here to make your home buying journey as easier as possible. We will guide you from the scratch and help you in preparing all the legal documents under your specific direction, file them with the appropriate court and serve all the parties involved. We will work alongside you to ensure that your documents are completed correctly, confidentially and in a timely manner

Here, we are offering a golden platform to the people who are passionate about earning money through smart work in their social network and without any investment. This online business model would definitely enhance your passive income and it would definitely bring

At Gokul Properties, we advice our clients not just acquiring property but also in investing in real estate sector through structural transaction that offer attractive returns. We empower our clients to make the right decision by investing in right property that yield strong returns in the coming years. As a part of the process, we assist our clients by comparing various properties and their probability of yielding higher returns

We assist real estate investors, lenders and developers, structure and apply debt and equity in transactions that seek to meet deadlines. Our real estate sector team also provides finance advisory services to our clients and assists them in raising funds in the form of debts or equity to meet their project financing. Combining market insights and experience with deep corporate finance knowledge, we can provide innovative solution that satisfies client’s need.

Beside our online forums and virtual interaction, the company has also been organizing seminars to get trained and learned more about this portal by our top expertise. The idea is to empower all our Independent Business Partners by giving them lifetime royalties with just a click of button.

You have the power to build your business according to you. You work on your own time as much as you want and you make money by sharing what you love. You’re in charge, but you’re not alone.

G-venture’s income model is so instant and compensate with your efforts and dedication. The moment you close the deal and your client buy the property in any of the gokul’s projects, you will get the payout within 45 minutes of closing the deal. You will be having access to g-ventures mobile application that will track your every lead, sale and commission due to you.

Being a g-venture is like cherry on the top for you, you won’t have to search other sources for the leads to work on. This is one-of-a-kind plan, where our company will provide you leads so that you reap great financial rewards and live a lifestyle you have always dreamed of.

If you want your loved ones to have an opportunity to own a successful business and earn extra income, and you want them to offer financial stability, you can transfer your position to anyone you want to, anytime you want to.

Being a g-venture not only gives you a financial security but also gives you an opportunity to be a part of likeminded stratum of the society. Nowhere else can you find an opportunity to feed others your knowledge and intelligence, only to thank others with sincere gratitude for your hard work in other’s lives.

You don’t need to stress over your daily reporting to your boss anymore! With g-ventures you can work independently and without any pressure. Put yourself in the driver’s seat with an opportunity to earn the use of G-ventures.